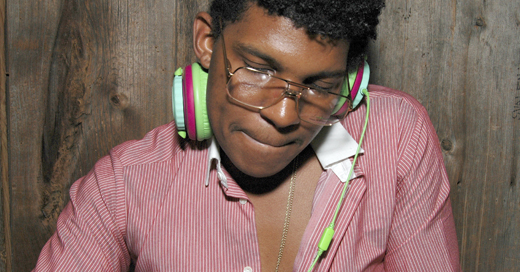 For Terry Campbell, aka Prince Terrence, it pays to put out.

After relocating to New York — a move paid for by Island Records — to play with Young Love, Campbell found a second job via paid DJ gigs in a city with more DJs than it probably needs. His first? A high-end burlesque club called Box where “I wouldn’t be able to get into if I wasn’t DJ-ing,” says Campbell, who spins four nights a week in New York and often flies to other cities to work afterparties.

Spinning supports his other job as a hired drummer, most recently for Santi White, aka Santogold. The two met at South By Southwest two years ago, and when Coldplay picked her to open up on their latest U.S. tour, she turned to Campbell to learn the studio parts played by current Bad Brains drummer Chuck Treece.

“He was taping up the snare drum in all these weird ways that I’d never seen, taping up the hi-hats so it would sound really trashy. It was crazy,” Campbell says.

At his first show of the three-week tour, he played to a sold-out crowd of 10,000. “I’ll never be able to say anything more ridiculous than that.”

“We were kind of intimidated at first,” he says. “Coldplay fans are average, normal people. It was awesome to have their crowd be so accepting of music that sounds so different from what they’re used to hearing.”

Campbell’s trek with Santi found him playing some of the biggest music festivals in the world: Summer Sonic in Japan; Reading, Leeds and Isle of Wight in England; and he opened for The Breeders, Massive Attack and even Grace Jones. Next week, Campbell leaves for Europe with his other project, heartsrevolution. Two months ago, he recorded with Spank Rock, with whom Campbell plays percussion live. Australian group Ladyhawke liked what they heard and have asked him to fill in.

All this feeds a mentality Campbell has had for quite sometime: Work with anyone, anywhere, and you don’t starve. “It’s fun. I’m free to do whatever I want.”

This week, he’ll fly in for a couple of days to spin at the Pink Door’s “Dudes Gone Wild” party, which takes place the second Friday of every month. Narwhal and Action Jackson also appear. On Saturday, he’ll be at Fuzion.

Campbell’s mix of choice these days is obscure disco. “When I play out, people might not know it, but they have a strong appreciation for it,” he says.