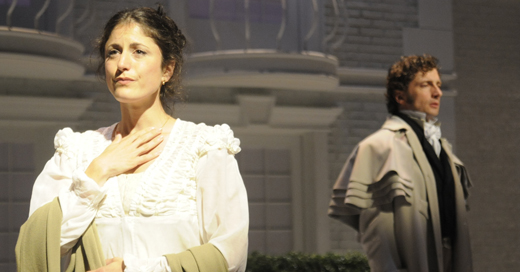 (Actors Theatre of Louisville presents Jane Austen’s “Pride and Prejudice.” Adapted for the stage and directed by Jon Jory. Continues through Nov. 2 in the Pamela Brown Auditorium. For tickets, call 584-1205 or visit www.actorstheatre.org.)

It is a truth universally acknowledged but seldom voiced — that the man who woos a woman after wearing her down with contempt will revert to an insufferable jerk a few years into their suitable marriage. If anyone thinks men don’t read Jane Austen, creeps who build cottage industries based on principles of antagonistic courtship prove otherwise. The “neg,” a conversational move in which you insult a woman to gain her interest, is straight out of the Austen classic “Pride and Prejudice,” adapted for the stage and directed by former Actors Theatre artistic director Jon Jory. To our fortune, Austen’s wit and good nature make Elizabeth and Mr. Darcy (is that the sound of a thousand women swooning?) more Beatrice and Benedick than the Mystery Method. With an energetic, winsome cast and adorable un-fussy costumes by Marcia Dixcy Jory, “Pride and Prejudice” transcends contemporary romantic cynicism, catapulting us back into the Regency Era and all its attendant charms.

The story is as old as stories about pretty girls hoping to marry well, and it goes down like a glass of champagne with a handful of petit fours — a frothy trifle, a delightful snack. Long-suffering patriarch Mr. Bennet and his shrill, excitable wife (champion ATL veterans V.C. Heidenreich and Peggity Price) have their hands full with five daughters: Jane (Emily Cedergreen), the unbelievably beautiful, kind and gracious older sister found only in the pages of period novels; Elizabeth (the fantastic Alexandra Tavares), known for her sharp wit and principles; middle-child brainiac Mary (Katharine McLeod), who gets zero action; and the boy-crazy Lydia and Kitty (Lada Vishtak and Allison Moy). Largely derided by Austen fans, here Lydia and Kitty are refreshing scene-stealers, giggly teenage foils to the elder Bennet girls so hung up on pesky details like character, honesty and love.

When nice (and rich!) neighbor boy Mr. Bingley (Thomas Matthew Kelley) brings his stuck-up buddy, Mr. Darcy (Anthony Marble), around to the village ball, Jane heats it up with Bingley while Darcy bungles his meeting with Elizabeth. Despite their instant mutual antipathy, there’s obvious chemistry. Misunderstandings lead to revelations, a scandal and a cover-up, and through all the withering put-downs and thinly veiled disgust, Elizabeth has to wonder: Can a guy as handsome and rich as Mr. Darcy be as pompous and hateful as he seems?

There’s a lot of philosophy sprinkled throughout, and we’re invited to consider the relative merits of prudence, pride and honor, but oh, who cares? Of course they end up together! It’s a romance, and Darcy, for all his snottiness, is totally the hottest and richest guy in the room. For Elizabeth to end up with skinny, obsequious Mr. Collins (the hilarious Joel Van Liew) or penniless bad boy Lt. Wickham (Drew Cortese, looking dashing in that uniform) would be a travesty of the highest romantic comedy order. See this one with your girlfriends, and don’t let anyone neg you at the afterparty — unless, of course, he’s hot, rich and British.