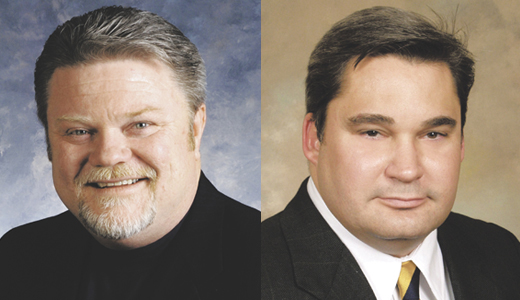 If all politics is applesauce, then, in the case of the 37th District, it’s also pork chops, giblet gravy and canned cranberry sauce. For not only does the district have a constitutionally-troubled past (it’s cut in two, cleaving Jefferson County’s Senatorial district into East and West Berlins), the southwestern Louisville political environment it represents is far removed, both culturally and politically, from the city’s typically liberal core — and has the candidates to prove it.    While most eyes are fixed upon either an Obama landslide, Yarmuth’s doubling lead or The-Little-Lunsford-That-Could, unorthodox Democrat Perry Clark is battling for his 37th District seat against challenger Doug Hawkins, a Republican Metro Councilman (25th District) and self-described “hard-right conservative Christian” in a race that could serve as a local political bellwether in these economically dysfunctional times. Both candidates hail from southwest Louisville, an area bounded by Iroquois Park to the north and featuring much of Dixie Highway as its main artery, and whose electoral makeup consists of blue-collar families that have been hit especially hard by the foreclosure crisis. Both candidates have outstanding marks from the NRA. And, perhaps not surprisingly, both cite the economy as the number one issue. “It’s been waxing bad here for some time now,” Clark, the incumbent, said. “I saw some of the numbers recently. There are large numbers of homes for sale in this district.”  Clark, whom informed me that he still sports cowboy boots and eschews wearing a tie to work (much to the chagrin of his peers in the Senate), also spoke of his idiosyncrasies as reflective of the voters’ will.   “I think people are tired of partisan bickering. I’ve always tried to do what was right and not what was politically popular, and not whip people into a frenzy with fear or hyperbole.” Clark suggested his opponent, Hawkins, is no stranger to this brand of politics.  For example, referring to Hawkins’ petitioning of Gov. Steve Beshear to repeal Louisville’s reformulated gas mandate in lieu of “conventional gasoline” (which, Hawkins argues, would be just as cheap as reformulated and save Kentucky’s taxpayers $700 million per year), Clark said: “A lot of it is just grandstanding to keep your name out there in the public. He’s a councilman, and he’s using his council district (as a platform) to run. I’ve never been that type of councilman, never used fear or frenzy. I’ve always used logic.”  Hawkins countered that Clark has gotten decidedly more liberal while in office: “I think some would argue that he’s changed his positions in a lot of ways. With his voting record, he seems to be following the Democratic leadership in Frankfort.” While driving through Hawkins’ 25th, one notices that the number of yard signs bearing his name dwarfs the number bearing Clark’s, suggesting that, whatever the nature of Hawkins’ native support, it is very real. “Perry’s got this libertarian bent,” Hawkins said, “but I’m in tune with the constituency out here, and I haven’t spoke out about any issue that my constituents didn’t support me on.” Issues like, say, the location of a munitions storage facility in the district, which Hawkins vehemently opposed until the Metro Council recently ruled in its favor, and which Hawkins claimed would contaminate the area’s water supply vis-à-vis its construction upon the Cardinal Hill reservoir. Though Hawkins declined to comment on the issue, Clark offered his opinion. “Would I have preferred for it to be another location?” he said.  “Yes, most of us would. But it has to go somewhere,” suggesting Hawkins’ opposition was largely “hyperbole” and “headline-chasing.”   Added Clark: “When Doug said, ‘in essence we have done the terrorists’ work for them,’ that’s a little extreme.”  Truth be told, Hawkins isn’t a stranger to headlines, and as state senator he said he would have more political freedom, in his words, “as a member of a majority in Frankfort than as a member of the minority in Louisville,” thus enabling him to pursue legislation of a broader scope. “Right now, we need a back-to-basics approach to the budget,” he said. “We also have a serious problem with healthcare insurance in this state. And we need to fix illegal immigration. The federal government has dropped the ball, the state hasn’t dealt with it, which leaves it to the local communities. Stan Lee proposed legislation last year that needs to be moved forward.”  Although any mention of Stan “The Mustache” Lee is sure to act as a lightning rod, no doubt dividing people along party lines (Lee is a coarse, say-anything right-wing hack), Hawkins’ voice nonetheless resonates with passion on the subject. Whether it will translate into an axiom that people beyond his council district can relate to is another thing entirely.  Clark and Hawkins, for all their apparent dissimilarity, together reflect the seemingly disparate fabric of Louisville’s southwest. Because I don’t claim to know too much about that fabric, I referred to an article by Lexington Herald-Leader reporter Ryan Alessi that described both men as “slightly eccentric,” and asked both men what they thought about that. “Individuals should be eccentric a little bit,” said Clark, laughing. “I guess I’m not the typical politician in the sense that I’m not easily approachable. I suppose it makes us interesting.” Concerning eccentricity, Hawkins was more succinct:  “I think (Alessi) reads the LEO too much.”  Applesauce, indeed.