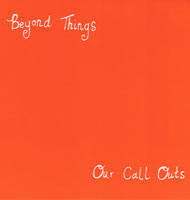 Our Call Outs, the debut from Bloomington, Ind.-based aggregate Beyond Things, straddles a wide chasm between adventurous eclecticism and stilted self-consciousness. The group imbues its sparse, largely acoustic arrangements with eerie, queasy atmospherics, and the off-kilter violin work creates a sense of unease that recalls Camper Van Beethoven’s edgiest work.

However, these elements clash with the group’s over-reliance on keening, Isaac Brock-style vocals, and this weakness is only amplified when the occasionally threadbare melodies fail to catch hold. (It also doesn’t help that the album stumbles right out of the gate with easily its weakest link, the plodding, tuneless “Our Shut Eye.”) Only a handful of songs display much forward motion, but “Skin & Space,” “AfterNextNowThenBefore” and “Now Evades” provide a pleasant contrast with the album’s languid tone.

The closing pair of “Addressing Numbness” and “When What Was Wrong Was Wrong” end things on an especially high note. Moodier and less precious than the rest of the album, these songs suggest that with a little more focus, Beyond Things could shape their potential into something sharper next time around.