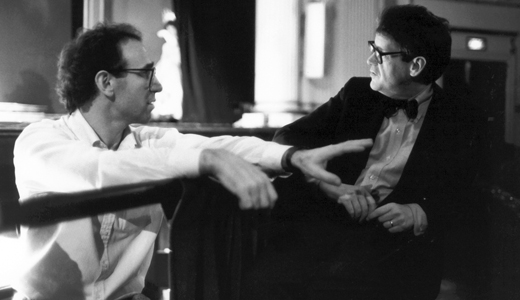 They’re going round and round over one word.

“Stop!” commands the typically British Major General. “I think I see where we are getting confused. When you said ‘orphan,’ did you mean ‘orphan’ — a person who has lost his parents — or ‘often,’ frequently?”

“Ah! I beg pardon,” says the King of the Pirates. “I see what you mean — frequently.”

And that’s the way it goes with the nonsense of “Pirates of Penzance,” the Gilbert and Sullivan comic opera presented this week by Kentucky Opera. Fortunately, the show has been moved from the opera’s regular venue in Whitney Hall to the cozier confines of the Brown Theater — so every word may be heard.

“In a huge theater, you’re only vaguely aware of this person singing off in a different zip code,” says “Pirates” director Thomson Smillie. “But in a theater like the Brown, where nobody is seated more than 70 feet from the stage, you can be much subtler and finer — and funnier!”

Which is what “Pirates of Penzance” is all about, or course. It’s the fun that’s been missing from the drab lives of the pirates (they’re all orphans, you know), until they chance upon the lovely daughters of the Major General, who bring color to their world — in a torrent of melodies and fast-paced patter.

“I think it’s a minor masterpiece,” says Smillie. “The idea of witty words and sparkling music — to hear your own language sung to really great music.”

I know all the televangelists

and all the rabble-rousers,

who preach the joys of chastity

till caught without their trousers!

What? You say you’re pretty sure there were no televangelists in 1879, when William S. Gilbert and Arthur Sullivan penned “Pirates of Penzance”?

Perhaps not. But there’s nothing new in hilarity rousers, with preachers caught without their trousers.

New treatments of Gilbert and Sullivan come along all the time, such as Gilda Radner singing a “Muppets Show” duet with a 7-foot-tall carrot. (She’d asked for a talking parrot.) Gilbert, himself, changed lyrics to keep his old shows fresh. So he might not mind that Smillie has updated the famous “Major General’s Song” — or care if Babylonic, cuneiform and Caratacus’ uniform becomes something about Brangelina, Britney Spears and even Hilton … Paris.

“I don’t think there’s any harm to leak some of it,” Smillie confesses. “I’ve completely rewritten it with 21st century words, some of which had to be expunged.”

Smillie directed at Kentucky Opera from 1981 to 1997, and the current production of “Pirates” reunites him with musical conductor Bob Bernhardt. The two teamed to stage the show here in 1991. “Pirates” itself premiered in Louisville in December 1880.

Which brings us to the back-story.

“People could sit up in the balcony in London with a shorthand pad and jot down the lyrics. And if they were really clever, they could even sketch the melodies,” Smillie explains. “Then they could cross the Atlantic and put on their own production without paying any royalties. At one time in 1878, there were five unauthorized productions of “H.M.S. Pinafore” running in New York.

But the composers hatched a plan for “Pirates of Penzance.” They premiered their new show on both sides of the pond at the same time.

“Pirates of Penzance” had its world premiere in New York on New Year’s Eve, 1879 — a grand success. But, hardly noticed, “Pirates” also premiered the same week in Paignton, a little English seaside town. Gilbert and Sullivan impresario Richard D’Oyly Carte happened to have a company of “H.M.S. Pinafore” touring the Devon coast, and without fanfare one night the company put on the “Pirates” of Paignton.

“Probably it was a pretty sketchy and inadequate performance,” says Smillie. “They just used the costumes from ‘Pinafore’ and the cast tied handkerchiefs around their heads to look piratical. But it was to establish copyright in England at the same time it was being established in America.”

Anyhow, “Pirates” was a smash hit and immediately spawned touring companies — one of which sailed into Louisville’s old MacCauley Theater. The MacCauley was later demolished in favor of the Starks Building at Fourth and Walnut (now Muhammad Ali) streets.

A couple decades ago, the MacCauley name was pinned onto the Brown, but didn’t stick. The venerable Broadway theater soon cast itself back as the Brown. In fact, this week’s performances of “Pirates of Penzance” will unveil a major refurbishing of the Brown.