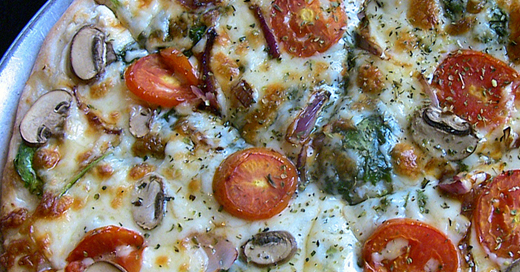 Pizza was born in Italy — Naples, to be precise — but like a lot of immigrants and their descendants, it started to change as soon as it landed in the United States.

Sure, the constants remain: Pizza is (almost) always built on a base of flat Italian bread, topped with tomato sauce and melted cheese and perhaps assorted toppings.

From that point, though, the variations ripple outward until we end up with such exotica as Wolfgang Puck’s iconic sour cream and caviar pie, the “Hawaiian Delight” with ham and pineapple, or even the piled-high Louisville-style pie made famous by the Impellizzeri clan, who turn pizza into something resembling a delicious casserole with toppings an inch thick or more … and extra cheese.

The Neapolitans — who regulate the construction of their pizzas under strict rules akin to those who govern Italian wine — keep things simple. The bread is key, with sauce, cheese and toppings used discreetly, as condiments on a dish intended as a snack but rarely a meal in itself.

To the best of my knowledge, only one Louisville restaurateur has offered true Neapolitan pizza made in a traditional wood-burning oven. Bim Deitrich did it at Allo Spiedo, which morphed into Primo, which closed last month amid great lamentation.

But we have a few options for the next best thing. Let’s take a virtual voyage to New York City, where Italian immigrants began fashioning the noble pie a century ago or more, generations before the pizza phenomenon went nationwide after World War II.

Like true Italian pizza, New York City pie boasts a thin crust and a relatively light hand on the toppings. Diners may sit down to dine on a whole pie at classic New York pizza houses like the storied DeFara’s in Brooklyn, but New York City pizza is best as walking-around street food. It’s usually sold by the slice, with toppings added only when the slice is reheated for your order.

To be authentic, it should be served by the slice on a piece of foil or wax paper atop a small, round paper plate. Fold over the whole works, plate and all, from edge to point, and you can nibble away from the point back as you stroll down Fifth Avenue or the Bowery.

Or, for that matter, you can do it on Main Street or Linn Station Road in Louisville, or perhaps Spring Street over in Jeffersonville. For amid a sea of Louisville-style pizza and an occasional square-cut Indiana pie, here and there around the metro you’ll find credible versions of the true New York City pie.

One of the best is Luigi’s (712 W. Main St., 589-0005), which coincidentally resides in Louisville’s most New Yorkish district, the blocks of Soho-look, cast-iron storefronts on West Main. Indeed, not only are the pizzas New York-style, but the sometimes-brusque repartee from behind the counter can evoke a sense of Gotham, too.

Let’s have a look a more recent arrival, after observing a moment of silence in fond memory of Hero’s New York Pizza Pub in Jeffersontown, which we’re sorry to report closed its doors this month. Fortunately for pizza lovers, Slice of NY, another spot in suburban J-town, vends an estimable New York-style pie.

Small but spick-and-span, it’s run by an Italian-American family from Long Island, and therein lies a small caution: When Papa is on the premises, he runs a tight ship. When he’s away and the youngsters are in charge, to be honest, dining here can be a bit of an adventure, with order-taking and service pacing seemingly influenced by the tides and the phase of the moon.

The pizzas, however, are worth the wait. Traditional New York pizza is available from $10 (for a small 12-incher with cheese) to $16 (for a 20-inch large with cheese); toppings are $1.25 each on the small, $2 each on a large. For traditional by-the-slice service, you’ll pay $2.95 for a cheese slice plus a quarter per item for a wide variety of toppings from the traditional (pepperoni, sausage and such) to the unexpected (bacon, jalapeño, chicken or feta cheese. Anchovies aren’t listed).

We ordered two small, whole pies on well-made, free-form breadlike crust — one with good-size balls of juicy, flavorful sausage and crisp red onions ($12.50), and the other a “white veggie pizza” ($13) topped with a creamy mix of ricotta and mozzarella cheeses (but no tomato sauce) blanketing spinach, onions and mushrooms and topped with fresh sliced plum tomatoes. Both were close to NYC standards, although showing just a bit of Louisville influence in a generosity with cheese and toppings that would have made it a bit messy to fold and eat a slice Big Apple-style.

Still, give Slice of NY an “A” for effort, and extra points for the addictive garlic knots (from 50 cents for one to $3.50 for a dozen): small, crispy bite-size knots of steaming Italian bread dipped in garlicky butter.

Are we having fun yet?
Fun Food Café makes it easy

The Mellwood Arts Center has added another eatery: Fun Food Café. It’s a limited-menu lunch counter concept that offers stuff like nachos, pizza, hot dogs, wraps and the like — not to mention cold beer.

I’ve been there a couple times on a tip from my friend Cricket, who works at Artist & Craftsman Supply in Mellwood. I have found the food to be average, but the concept is admirable: a good excuse to sit outside in the courtyard and enjoy a sunny afternoon and some people-watching.

On my first visit I got the “Fabulous V-Dog,” which is FFC’s take on a Chicago-style dog, featuring mustard, sweet pickle relish, onions, sport peppers and tomatoes. (Actually, the “sport peppers” I got were banana peppers.)

Most items are $3.99, or $5.99 for a combo, which includes a drink and a bag of chips, and the menu sometimes changes. For instance, on my last visit, the special of the day was a grilled burger combo for $4.99. Pizza is $2.99 by the slice, and the café also offers Seattle’s Best Coffee, morning-time muffins and some dessert options like ice cream sandwiches and drumsticks for $1.50 each, plus Itti Bitz pelletized ice cream — which is kind of a blend of ice cream and candy — for $2.50. —Kevin Gibson

I’ve long been a fan of Westport General Store and consider it well worth the half-hour drive from Louisville up the Ohio to this riverside hamlet north of La Grange … and the drive is never better than during autumn leaf-peeping season.

Now proprietor Will Crawford is celebrating Westport’s fifth birthday with a deal that’s hard to refuse. Through the end of November, you can enjoy three of Chef Harold Baker’s excellent appetizers (and two potent Old Forester bourbon drinks) for just $5 each.

We stopped by the other night to wish ’em a happy birthday and made a light and affordable meal for two out of three tasty apps: Westport wontons are golden pastry triangles stuffed with an earthy mix of mushrooms, apples, white cheddar and curry, plated on a tangy, basil-scented, sour-cream sauce.