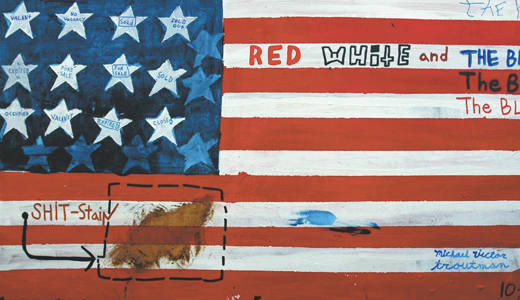 “Propaganda is the deliberate, systematic attempt to shape perceptions, manipulate cognitions, and direct behavior to achieve a response that furthers the desired intent of the propagandist.”

—Garth S. Jowett and Victoria O’Donnell
in “Propaganda and Persuasion”

When deciding on a theme for their next show, artists Robby Davis and Jenny Wingo asked questions. They took the pulse of modern culture and noted what factors increased the heartbeat. War. An election. A frail economy. Deception.

“We looked at what’s going on today — the state of our nation. People are passionate right now. We wanted to create a show that sparked interest,” says Wingo. She and Davis are known as the Pedestrian Duo. Formed in 2007, their mission is to provide artists an alternative to the traditional gallery scene.

When the call for artists went out a few months ago, Wingo saw an immediate interest. “Propaganda: The Movement” opens Friday night at Skull Alley and features works by more than 50 Louisville artists.

“We’re once again impressed with the amount of talent and enthusiasm Louisville has for the art community,” Wingo says. “We wanted to present a show that offers more than one viewpoint — where the pieces work together to create a high collective energy.”

The idea of using art as a method of influence appealed to Wingo, and as she started to research the political propaganda of the ’40s and ’50s that fueled America’s fear of Communism, it wasn’t hard to draw parallels to today’s climate, she says. “We asked artists to spread a message through art and persuasion. Propaganda is an essential part of that. Propaganda is the art of persuasion.”

The show features all types of mediums, including some that are interactive. Wingo’s piece involves a display of lollipops with propaganda-tinged messages on each wrapper. The main sign reads: “It’s your future. Choose wisely.” Other pieces in the show cover the gamut — from drowning elephants and circus freaks to shit stains.

Some of the activities planned for Friday’s opening reception include a graffiti wall outside and live music by Dustin Mattingly, Brian Probus, Ben Traughber and Andrew Iafrate.