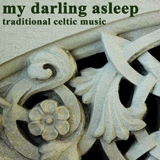 The average person’s knowledge of traditional Celtic and Irish music doesn’t extend too far beyond Riverdance and The Pogues. This vibrant, wildly influential folk tradition has become a parody of its former self and has been relegated to those little stations at department stores where you press buttons to hear samples of nature sounds and new-age schlock. This exile is a terrible shame, considering how enjoyable this music can be when it’s done well. My Darling Asleep know what they’re doing. The musicianship is strong, and the love and respect for the music is obvious. If most people only know The Pogues and Riverdance, My Darling Asleep should be in good shape, as they seem to fall into the sweet spot right between the two. They aren’t nearly as edgy as The Pogues, but they do still possess credibility. They’re safe and family-friendly like Riverdance, but they lack the dull silliness that has made Michael Flatley & Co. a lame joke. The record contains a mix of instrumental dance tunes and lovingly rendered ballads. If you only listen to one local, traditional Celtic record this year, why not this one?