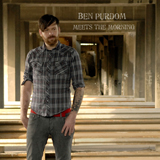 With his plaintive vocals and coffeehouse-friendly acoustic backdrops, it’d be tempting to think of Ben Purdom as just another earnest Louisville singer-songwriter. And while the sleepy folk of Meets the Morning occasionally gives credence to this assumption, the record manages to incorporate enough detours to stand out from the pack. Unlike so many similar troubadours, Purdom’s songs are refreshingly devoid of alt-country roots, and in declaring his independence from the genre and its attendant trappings, Purdom allows the album to draw upon some surprising touchstones. Witness the opener “Godspeed,” a dead ringer for some of the dreamier Pixies songs like “Havalina,” or the organ-laced “Graceland,” which recalls Aimee Mann’s most lugubrious work. But if Meets The Morning has an explicit spiritual predecessor, it’s John Frusciante’s similarly subdued Curtains, an album that echoes unmistakably through the aching melodies and rough-hewn beauty of “Plastic,” “Rattlesnake” and “Tap on the Glass.” This triptych, along with the lovely “I Will Not Go Back,” forms the backbone of Meets The Morning and suggests that Purdom may be a cut above the average Louisville folkie. Purdom hosts an open mic Wednesdays at The Monkey Wrench (1025 Barret Ave.).