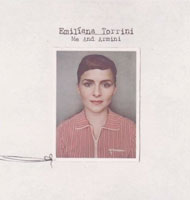 Nobody knows it but everybody’s already heard Emiliana Torini. Hint: “Gollum’s Song.” Yes, that’s her singing over the end credits of “The Two Towers.” Lord of the Rings nerds, however, are probably not the best audience for this multi-talented singer-songwriter. Unless they also like folksy, electronic-influenced songs orbiting a girl’s gilded voice.

Those orbits, by the way, shift styles song to song though not so far that Torrini’s third solo album (not counting those that were only available in her native Iceland) comes across unrelated. To the contrary, the minimalist compositions keep their consistency by enveloping, then elevating her buttery voice. At the same time, she emerges unadorned, understated and completely sublime, especially during the acoustic “Hold Heart,” a sashaying lullaby.

For a taste of her dark side, turn to “Gun,” a deliberate and burning coup d’état underlined by a salacious groove that crosses a Barney Miller bassline with a page from Ennio Morricone’s playbook. As titillating as it may sound, the sentiment is quite steely: Look me in the barrel and tell me that you love me / Yes this is a kiss that I swear will blow your mind. As if listening to her dabble effortlessly between reggae, funk and folk wasn’t mind-blowing enough.