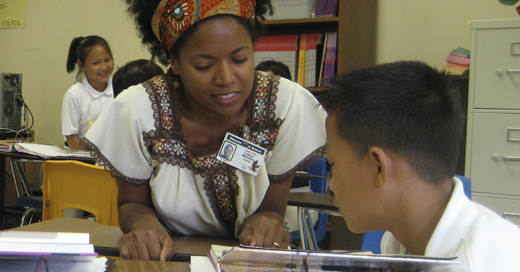 In the hallway, the laughter all sounds the same. But listen closely and there’s a swirl of different languages — Vietnamese, Arabic, Swahili, just to name a few.

Inside the classroom, rows of students are dressed in the standard khaki pants and pressed white shirts, but the occasional brightly colored hijab or ornate belt buckle reveals this isn’t your average school.

In fact, it’s the most ethnically diverse school in the city.

Now in its third year, the Newcomer Academy at Shawnee High School was a bold move by Jefferson County Public Schools to serve a growing population of immigrant and refugee children settling in Louisville.

“We needed to do something different,” says Marti Kinney, English as a Second Language (ESL) coordinator for Jefferson County Public Schools. Ultimately, Jefferson County settled on a vastly different, decidedly progressive program to educate the unique group of students who have little to no experience with the English language or American culture.

After studying how a number of other cities — such as Atlanta and Columbus — were educating these newly settled immigrant and refugee children, JCPS opted for an approach that entails one full year of intensive ESL study in addition to the standard curriculum mandated by the state government.

Previously, these students would enroll directly in an ESL program at a local middle or high school, spending two hours a day with ESL teachers, and the rest of the time taking classes alongside American students.

And while the original ESL program is sufficient for the majority of students whose primary language is not English, it was clear that a fraction of international students needed more than two hours of English training.

There now are 14 teachers instructing roughly 150 Newcomer Academy students from places like Iraq, Burundi and Cuba. Because the number of new arrivals is perpetually rising, the enrollment can change daily as well.

Gwen Snow, an ESL resource teacher at the school, says Life Skills covers topics from nutrition to the basics of American customs. “It’s one thing to struggle with how a lock on a locker works in sixth grade, and a different experience in high school,” says Snow.

Because many students are refugees dealing with the aftermath of systematic violence and instability, all are required to meet with an art therapist. For some, the therapy is a crucial first step in moving forward, with the drawings serving as an emotional outlet for students who might not be able to vocalize their trauma in any language.

The students at the Newcomer Academy are all experiencing the American school system for the first time, but for some, it’s the first time they’ve ever stepped foot into a classroom anywhere.

Given this fact, it’s a remarkably uneventful scene.

Listening to morning and afternoon announcements delivered by an enthusiastic principal who might have a future in sports broadcasting, the students flirt and socialize in the cafeteria. One group of younger, rambunctious kids give fake “injections” with mechanical pencils.

For a moment, it looks like just about any typical American school.

A recent study by the Urban Institute found that while the immigrant population in Louisville is significantly lower than the national average — 4.5 percent compared to 12 percent — the immigration rate here is rapidly growing.

Shawnee High School was chosen as the site for the academy because it had extra space available, and because, being a magnet school, the bus system would provide transportation to newcomers living anywhere in the city. While the two schools share a building, they are considered separate entities. The students rarely intermingle, though there is talk of more joint after-school programs in the future.

When a new student enrolls in JCPS, he or she must take an English language assessment test. If the score is low enough and the regular ESL program is not sufficient, the student will enroll in the Newcomer Academy.

Middle and high school students who qualify for the Newcomer Academy are eligible to complete one full year at the school. After that year, the student is required to transition into a regular school.

Funded by federal money that is not diverted from any other JCPS program, the Newcomer Academy is bound by the same standards as any other middle or high school in Kentucky.

Lidice Morales — originally from Cuba and a recent U.S. citizen herself — spends part of her mornings teaching Life Skills to a group of 12- to 14-year-old Karen students.

The Karen are one of the latest refugee populations to settle in Louisville. They are a persecuted minority in Burma, a country that gained attention a year ago when Buddhist monks protesting the military regime were beaten and killed.

Morales spoke with students about the basics of filling out forms. “It looks so simple because we do it here all the time, but for many of these children and their families, it’s the first time they have seen so many forms.”

A five-year employee of JCPS, Morales shares a story. “When I knew the Karen were coming, I was a little scared. They’re from Asia, I’m Latina. How would they react? But after a month, I love them. The parents are great. You feel it. They want to be educated.”