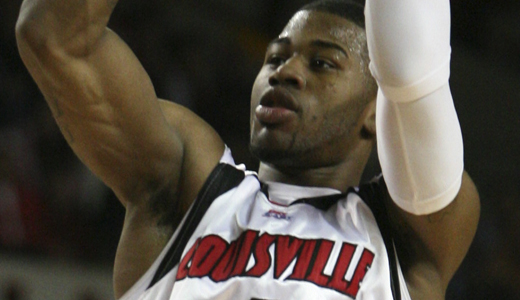 BELKNAP CAMPUS — On assignment, the intrepid reporter is driving through the red and black quagmire U of L students maneuver daily. Who knows why, but he asks himself — as the youngest at the Seder table asks during the Jewish observance of Passover — Why is this day different from all other days?

Simple answer: It’s basketball media day, harbinger of the most sacred of seasons — college hoops. It will end April 6 with a new national champion, which coincidentally is two days before Passover.

On Seder night it is traditional to ask Four Questions. Cardinal fanatics also have a quartet of queries as the season dawns.

The intrepid reporter intends to find answers amidst the boilerplate sound bites that plague these media show-and-tells.

1. Can the Cardinals win the NCAA tourney with a freshman center?

IR: “What would you say if told U of L had a freshman playing center both times it won the NCAA?”

TJ: (Eyes twinkling.) “It feels good to learn that. I’d looove to win a national championship my first year.”

According to Rick Pitino, “Jennings is the key to the team. Because of Samardo Samuels’ game, he’s going to get in foul trouble a lot. Jennings has got to be ready.

“He’s a raw talent. He runs the court and blocks shots. In high school, he was compared to a young Amari Stoudamire. We’ll see.”

Samardo Samuels, considered by many the best prepster in the land last year, is the freshman in the 5 spot fans are talking about.

IR: “Samardo Samuels, you familiar with U of L basketball history?”

IR: “What would you say if you learned the Cardinals have won two national titles, and both times they had a freshman playing center?”

“He’s got great hands and a long wing-span. Reminds me of Darryl Dawkins. He needs to work on finishing.”

One wonders if the coach is schooled on Cardinal hoops history?

IR: “Coach, you’re a master motivator. Let me ask you if you’ll use this? Both times Louisville won the NCAA, it was with a freshman center …”

RP: “Pervis Ellison and …”
IR: “Rodney McCray.”
RP: “McCray played center? Really? I didn’t know that. Rest assured if this team gets that far, I will mention it.”

Correct answer to Question No. 1: You betcha.

2. Will point guard become (a) a distraction with Andre McGee and Edgar Sosa fighting for PT, (b) a Two-Headed Behemoth, or (c) with Preston Knowles in relief, a modern day Cerberus, the three-headed attack dog of Greek mythology?

Coach’s company line: “I don’t care who starts the game. It’s who is in at the end that matters.”

Sosa, planning to rebound from his sophomore slump, agrees: “Coach just worries about the end of the game.”

Regarding the “rivalry” with McGee, he is frank: “We both want to start. But coach makes those decisions. We compete every day.”

Unsolicited, Sosa mentions Knowles, saying he “came right into the system and contributed.”

McGee also gives a straightforward perspective. “We get after each other every day in practice. We’ve been competing all summer. We’re looking to play someone else and beat up on them.”

McGee explains why all will play. “We’re playing real fast. We intend to jam the ball down other teams’ throats.”

Which echoes Pitino’s comments: “The guys have been working extremely hard to play faster. We want the ball past midcourt in four seconds.”

“This is a good group of kids that really get along. Andre is in great shape. Sosa is working on his consistency. Knowles doesn’t practice good, but steps up at game time.”

During practice the coaches were all over Jared Swopshire for every little mistake, shouting his name more than all other players combined. Pitino feels the kid “has good offensive skills. Swop has a great future.” Given the attention to the newcomer, the intrepid reporter figures the future comes sooner than expected.

Reginald Delk started for a good Mississippi State team. At Louisville he will be a stealth weapon, backing up T-Will. Delk is “looking forward to showing the fans what I can do. It was tough sitting out last year.”

Correct Answer to Question No. 3: It’s no secret. The Cards are deep and talented and will assault opponents in waves.

4. Is Terrence Williams ready to be team leader?

This is the big one, right? The kid’s a flake and a narcissist. T-Will still wears a hospital bracelet from his knee injury surgery. His coach jokingly calls him “psychopathic” and mentions how T-Will is never far from a mirror.

Williams intends to be back in uniform Nov. 22. Asked what he worked on over the summer, he says, “Shooting. Dribbling. Patience. I’ve got to learn to be patient.”

Asked if it’s a fair observation that he often doesn’t finish hard when taking the ball to the hoop, Williams bristles. “It depends on who is observing.”

During practice — he couldn’t participate because of his knee — T-Will encourages teammates some of the time, vogues for onlookers most of the time.

If Terrence Williams forgets he chose No. 1 for his jersey, assimilates the David Padgett qualities that Andre McGee possesses and is accepted by teammates as leader, he may grow into the role.