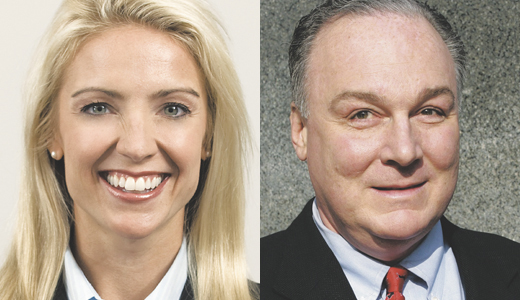 It’s true Katie King has practiced law for less than three years, compared to her opponent in the race for Jefferson County district judge, an attorney with 19 years experience. It’s also true she’s never actually tried a case, and that she’s been reprimanded for her courtroom demeanor, being late to work and abusing sick leave.

But the 29-year-old candidate says what’s more important than the length of her career is what she’s managed to accomplish during her stint as an assistant county attorney. (Never mind that she recently berated her boss with a string of vulgar expletives in front of an audience, an indiscretion that WHAS-11 reports has resulted in merely a slap on the wrist.)

Pushing away the remnants of a lemon poppy seed muffin during a recent interview at a coffee shop near the courthouse, King launches into a convoluted sports analogy to explain: “For example, I played volleyball for four years at U of L. There were some people on that team who played every match and gained a lot more experience than the people who didn’t play as often …” She continues for a moment along this line, and then: “Wait, what was the question?”

After a brief reminder, she continues: “I’m the four-year player who plays in every game, and he’s the guy who only played here and there.”

The “guy” she’s referring to is David L. Holton II, appointed to the bench earlier this year to finish out the term of a judge elected to the circuit court. Prior to his appointment — which made him the first blind judge in Kentucky — the 46-year-old spent nearly two decades as an assistant county attorney and private lawyer focusing on family law.

Citizens for Better Judges — a committee of lawyers dedicated to “improving the quality of the judiciary” — recently endorsed Holton in the 16th division district court race. A Louisville Bar Association poll found only 2 percent of 4,000 lawyers surveyed believe King is highly qualified and 18 percent say she’s unqualified (the highest of all the judges on the ballot this year), compared to 16 percent who view Holton as highly qualified and 6 percent who deem him unqualified.

Despite a lack of experience, King unexpectedly emerged from a field of nine candidates in the May primary, with Holton coming in second. Leading up to that victory, King — daughter of Metro Council President Jim King — shelled out an astounding $111,000 on her primary campaign, compared to Holton’s $51,000. Since then, King has raised an additional $94,000, with Holton lagging behind at $55,000, according to the Kentucky Registry of Election Finance.

When asked whether her father has been heavily involved in the campaign, King says absolutely not, insisting she hasn’t even seen him in a long time. And while that might be the case now, Jim King clearly was involved early on, so much so that a mass e-mail he sent to fellow politicians and government officials seeking support for his daughter raised ethics questions about improper use of authority. Plus, it appears he’s currently engaged in a campaign-sign war, lining his frontage along Newburg Road with “Katie King for District Judge” signs while his neighbor — with whom he’s been involved in a zoning dispute — has taken to stacking “David Holton for Judge” signs to block out King’s.

Justifying the fact that she’s never tried a case, King explains that defendants in district court typically opt for a plea deal, adding that she has observed several jury trials. What’s more important, King says, is her knack for quickly moving a lot of cases, sometimes clearing as many as 40 on the morning docket alone.

“I won’t comment on her experience, but what I will say is that I know that after I had been practicing law for two years I was not ready to be a judge,” Holton says. “You gain knowledge with every day you practice, and I think that before you sit in judgment of another person you must go through some trials and tribulations in your own life.”

It’s the same measured tone he’s conveyed throughout a campaign that’s taken some bizarre turns and garnered an unusual amount of attention, mostly focusing on King. But Holton’s calm briefly lapsed during a recent interview when he learned his opponent suggested his campaign might be behind two anonymous fliers attacking her.

The first flier — sent to local media and bloggers in September — includes two photos of Katie King, one of her bending over and showing a fleur-de-lis tattoo on her lower back. Neither photograph is offensive, and the text of the flier more or less calls the candidate absurd.

The second flier, however, is a bit juicier. Also sent to local media, the attack piece includes two less-than-flattering photos of King (in the same clothes she was wearing in the first photographs). Again the photos are relatively tame, but this time the flier details a 2004 incident involving police at her Tyler Lane home. In a nutshell: Police responded to the home after receiving a 911 hang-up and found marijuana; King’s boyfriend accepted responsibility for the drugs, was arrested and charged with possession; King was not charged.

When asked who she believes is behind the attack pieces, King insinuates it might be her opponent. “There’s somebody out there who doesn’t want me to win. I don’t know who that person is. It could be the other campaign,” King says, adding that after Election Day, she plans to uncover the culprit, even if that means legal recourse. Reiterating the bold accusation, she continues, “I’ve been made aware that my opponent has used smear campaigning before, so I don’t know.”

In 2000, Holton made an unsuccessful bid for state Senate. During the campaign, he says someone made anonymous calls bad-mouthing his opponent, but it never was proven who was behind the stunt; he vehemently denies involvement.

“That doesn’t surprise me that she said that. She’s trying to smear me by rumor and innuendo, but there’s no credence to that at all,” says Holton. “She’s trying to convict me on that without a trial and I’m not going to stand for it. I had nothing to do with this.”

After the second flier made headlines, the King campaign was quick with damage control, providing The Courier-Journal with a statement they attributed to the ex-boyfriend, Brandon Detenber, in which he supposedly acknowledges his conduct was inappropriate and that King was right to call 911.

But Detenber has since denied approving the statement.  Asked to explain the situation, King becomes noticeably uncomfortable, but keeps talking: “Brandon and I are friends and we’ll always be friends. I respect him. I did not condone his behavior that evening. All I can say was I did what I thought I had to do to help the situation. He was the one that was charged, he plead to it. I wasn’t charged. I didn’t plead to anything. There’s been no evidence of wrongdoing on my part.”

King claims the two have recently talked “once or twice,” and that they are amicable. As for whether her campaign made a mistake in issuing the statement on his behalf, she says, after a long pause, “There might have been a misunderstanding, but you know, I think he’s a great guy and I wish him all the best …” At that point, a campaign handler intervenes, saying that’s a question for the ex-boyfriend. Unfortunately, he did not respond to a request for comment.