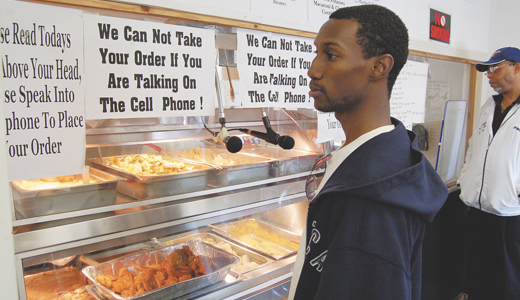 Lined up butt to bellybutton, customers at Big Momma’s Soul Food Kitchen recite their orders into the microphone. It’s a tiny eatery at the end of West Broadway across the street from Shawnee Park that is easily overcrowded with only a handful of customers who walk in for the baked chicken, smothered pork chops, ox tails, salmon croquettes, okra and lima beans.

This is the last stop on a two-week binge of eating exclusively in west Louisville, in order to dispatch from the ground level the food security in an area marked as a wasteland of junk cuisine — a food desert.

The rules were simple. No eating or purchasing food outside the generic limits of the West End, bounded by Ninth Street and Algonquin Parkway. Also, one meal a day had to be purchased from a place other than the food I bought at the grocery store. Simple enough, right?

Navigating the wasteland of well-known urban restaurants that are densely populated in these neighborhoods cut many of my work days short: stomachaches and afternoon fatigue were common.

That is the choice residents without access to affordable and nutritious food have to make.

Though disproportionately affected by heart disease, high blood pressure, diabetes and obesity, it is argued that the tasty Southern diet affectionately called “soul food” represents the ingenuity of African-American heritage — the ability to make something out of nothing. Others contend it is a poisoned legacy of former slaves who ate scraps saturated with grease, fat and pork.

“I call it home-cooked meals,” says Jessie Green, owner of Big Momma’s Soul Kitchen (4532 W. Broadway). “I just named (the place) that.” She defends the food’s healthiness, but as a lifelong resident, Green laments that there are fewer choices in west Louisville to eat.

One of the easiest choices for a sit-down lunch that won’t kill you is Expressions of You Coffeehouse (1800 W. Muhammad Ali Blvd.), which has a menu that isn’t fried in a grease pool. The lemonade is fresh, the sandwiches tasty and they have turkey-bacon, too. It can a bit pricey for those with serious pocketbook woes or who are just plain frugal: $8.95 for a club sandwich meal, which includes a pickle and your choice of bagged potato chips.

Defined as “the availability of nutritionally adequate and safe foods,” food security has been inserted into the forefront of our consciousness of late. The energy crisis and recession have made healthy food more expensive and less available. Case in point: It was recently reported that with the stock market tumbling, McDonald’s profit jumped 11 percent, in large part due to economic woes that are forcing many people to “trade down” their higher-priced food options.

Mike Bramer, director of Healthy Actions at the Louisville YMCA, says problems caused by the density of fast-food restaurants are compounded by the proliferation of snack foods, candy, soft drinks and alcoholic beverages that are readily available at neighborhood convenience stores in west Louisville. Those are the most frequented places where residents without private transportation get their food.

Assessing several corner stores in west Louisville and east downtown, Bramer tells LEO Weekly he found that less than 1 percent offer fresh fruits or vegetables to customers. When they do, the quality is quite poor, he says.

“We keep talking about nutritional education in the schools and churches,” Bramer says. “But what good is it to tell a child you should eat five fruits and vegetables a day if (at) the only store in walking distance, there’s no option there?”

Trying to address the lack of availability, city health officials started the Healthy Corner Store Initiative, a partnership between the YMCA and Metro Louisville’s Center for Health Equity. The project meets residents where they are by stocking local convenience stores with healthier fresh food choices to provide customers with more options.

The initiative, however, started on the wrong foot. In July, the program’s pilot store, J&J Food Mart, was set to receive the $20,000 grant to purchase new freezers, make renovations and advertise its newfound mojo. How-ever, after a review of its sale receipts, the U.S. Department of Agriculture banned J&J Food Mart, located on 16th & Oak streets in the California neighborhood, from accepting food stamps and WIC vouchers, and project organizers quickly tip-toed away.

Bramer says they reopened the assessment process and have identified two stores, in the California and Smoketown neighborhoods, that they’re prepared to unveil by mid-November.

“This is a systemic issue,” he says. “What we’re learning is that if you help store owners with infrastructure and the know-how, more of them are interested.”

Without putting more emphasis on the accessibility issue, we’re shooting ourselves in the foot no matter who preaches to “eat responsibly.” One day when I was particularly famished, pulling over to McDonald’s was the cheapest and speediest decision. In the short term.

“It slows you down and dulls your senses,” says Naela Serikali, a doctoral student at the University of Kentucky’s College of Public Health who lives in west Louisville. “If you’re not eating whole foods, then your body is not getting the proper nutrients. It affects everything you do.”

Serikali says last month’s blackout — the result of wild Hurricane Ike winds — showed how easily a food crisis could affect the entire community, particularly food deserts in west Louisville. On the third and fourth nights, when refrigerators were emptied of rotten meat and spoiled fruits, dozens packed the fast-food restaurants and convenience stores that had power.

“We learned that we’re eating off rations like soldiers in the field,” she says. “It raises a lot of questions about how to maintain the food we do have, and if it becomes scarce, what community-based emergency plan do we have?”

With 25 distribution centers around Metro Louisville, the Dare to Care Food Bank’s warehouse has a capacity of 1.5 million pounds — that wasn’t affected by the citywide blackout.

“I think we have a good system to assure that everyone has access the food people need to be healthy,” says Stan Siegwald, director of development at Dare to Care Food Bank. “There are weaknesses in that system in parts of south and west Louisville, where there are high areas of need without a strong nonprofit presence.”