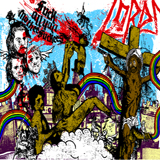 Punk metal billy goats return with a new album full of sunshine and lollipops. Boasting a subtle, enigmatic title and cover art that has to be seen to be believed — check out the massive schlong Our Lord and Savior is packing, for starters, and then dig the mountain of bloody baby heads and one brave little coat hanger on the other side for dessert — Fuck All Y’all Motherfuckers pretty much lives up to its name. Opening with a slice of audience-baiting buffoonery, the album kicks in with “Robbed, Raped and Beaten” and pretty much pummels you into some kind of submission, save for “Intermission,” which is another piece of aural comedy (what is this, a hip-hop album from 1997?). “Fuck All Y’all” is about as hardcore as it gets. Standout cuts include “I Know What You’re Doing,” “Waist Deep In Shit” and “The Leginald of Reginald,” an instrumental that shows off (dare I say it?) the band’s more experimental side. File under “Not for everyone.” Have a nice day. Listen to Lords’ Chris Owens discuss the band’s new album on LEO’s weekly Music ’Cast.