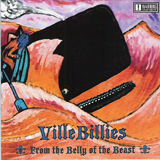 Two years beyond their major-label debut, the VilleBillies return to independence with From the Belly of the Beast. Any worries that this would bring a lower production quality are unfounded. If anything, Beast is more produced than its predecessor. Fans of their single “Rolling Stone” will be happy to hear the rock elements have been turned up to 10 on the new album. Though it’s been years since a viable “rap-rock” hybrid group roamed the earth, a good deal of Beast is infectious, and you find yourself tapping your foot in spite of yourself.  The album’s closers, “Preachers” and “Bar Room,” are acoustic-driven head-nodders that make you sing along on first listen. “These Days” is probably the strongest cut, with the guitar riff reminiscent of The Knack’s “My Sharona,” a multi-format win that should be pushed to radio immediately. “Don’t Make Sense” breaks down the fourth wall, with a glimpse into the ’Billies’ lives since their last disc. This isn’t my usual style of music, but the VilleBillies are as sincere as they are fun, and you can’t knock anybody for having a good time and meaning it.