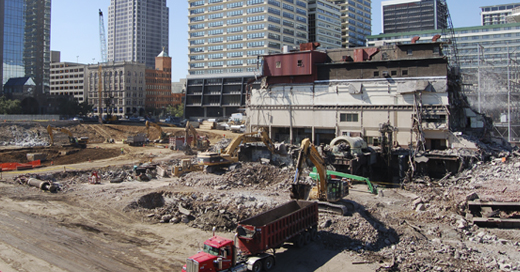 Sitting at a boardroom table littered with three-ring binders, spreadsheets and legal pads, Jim Host leans forward to shake hands without rising from his seat.

It’s been a month since the Louisville Arena Authority closed on a $349 million bond deal to finance a new arena slated to open on the waterfront in November 2010, and as chairman of the authority, Host still is reeling from the fact that it almost didn’t happen.

“Timing was everything,” he says, referring to the fact that a deal was made just days before the economy took a nosedive. “Had this not happened when it did, we wouldn’t be sitting here.”

The Arena Authority was on the verge of finalizing plans to pay for the project earlier this summer when the deal unraveled after a financial market analyst issued a “negative watch” for the bond insurer (a dire indicator of the economic crisis in store). The authority scrambled to come up with an alternate plan and signed on the dotted line just in time.

“There was no way we could have gotten this deal closed with the credit markets like they are today,” says Host. “God was looking down on us.”

On this afternoon, Host has agreed to dissect exactly how the Arena Authority intends to repay that debt, which with an average 6.45 percent fixed interest rate, amounts to $585 million to be paid over the next 30 years.

“Stop me if it gets too complicated,” says Host, his blue blazer flung over the chair next to him in a boardroom of the Kentucky State Fair Board office at Freedom Hall.

Clearly on task, Host pulls one of two pens from his shirt pocket and quickly breaks down the anticipated revenue stream, starting with tax increment financing (TIF), a funding mechanism expected to generate $265 million, nearly half the debt. The next largest chunk will come from Metro Council, which agreed to contribute at least $206 million over three decades. The remainder of the debt — $114 million — will be repaid through a variety of sources, Host explains, including revenue from the sale of indoor advertising, luxury suites and naming rights, as well as events at the arena.

“For all those who have said from day one, ‘Well, if they don’t sell the naming rights, or if they can’t do this or that, they can’t make it work,’ — wrong,” says Host, pointing out that if the revenue sources perform as projected, the Arena Authority will end up paying off the debt early.

And that brings us back to tax increment financing, the crux of the repayment plan.

When asked to explain — in layman’s terms — how the TIF will function, Host responds with a pop quiz: “Tell me what you think a TIF is.”

Not satisfied with this reporter’s admittedly over-simplified explanation, Host says, “No, no, no,” before plopping down a four-page chart outlining anticipated arena revenue, broken down in rows of miniscule and nearly illegible numbers.

(Sparing you the details of that convoluted exchange, here’s a basic explanation of tax increment financing: A geographic area around a major development — in this case the arena — is declared a TIF district; the amount of property tax and sales tax revenues in that district is frozen, and any future gains in tax revenues are used to repay the debt incurred from building the arena. Got it?)

What’s unique about the TIF district surrounding the downtown arena is its size of 6 square miles. State law only allows such sprawling TIF districts in rare cases.

“It’s a pretty good size,” admits Host, but he doesn’t see that as a bad thing. “All we did was take the existing legislation and use it to the maximum. Why wouldn’t we?”

When asked how this TIF compares to others, Mark Rosentraub, a prominent expert in the area of the economic impact and financing of sports arenas, sighs loudly, saying, “That’s a big one.”

When TIF districts are expanded to larger-than-usual sizes, it’s typically because the anticipated amount of nearby development will not generate enough revenue, according to Rosentraub, a professor of urban affairs at Cleveland State University.

In this case, he says, “Can you really make the case that something so far away really grew because of the arena?”

Indianapolis is an example of a city that has relied heavily on tax increment financing to successfully develop its downtown, sometimes using similarly broad TIF districts.

“At the end of the day, though, you have to ask, ‘Is this going to produce an outcome that makes Louisville better?’” says Rosentraub. “If it works and the city looks good in the end, does it really matter that the TIF was way out of proportion?”

What’s more concerning to Rosentraub is the fact that the Arena Authority is only banking on holding 107 events annually in the 22,000-seat facility, including University of Louisville games.

“Let’s hope God’s good to them,” says Rosentraub, who is commissioner of Quicken Loans Arena, home of the NBA’s Cleveland Cavaliers. That arena books about 230 dates a year. “For us, 107 events would be a disaster. Very uncomfortable would be a very gracious way of putting it.”