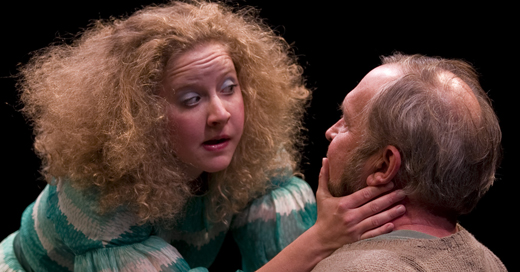 Watching a Christopher Durang play is like visiting a funhouse with three anarchists, your ex-girlfriend, her mother and a monkey — rules don’t apply and you’re always five seconds away from a spectacular meltdown. One of America’s most unpredictable satirists, Durang skewers sacred cows with unbridled glee. The Necessary Theatre, under the direction of Alec Volz, brings six of his short plays to the MeX this month. In this production of “Durang/Durang,” the company opted for a custom selection of the playwright’s shorts, and the result is uneven, lacking in unity and hampered by a poor casting choice in the second act.

In “Kitty the Waitress,” a heartbroken sad sack (Tad Chitwood) falls victim to a bait-and-switch as a restaurant sends, in turn, a seductive catwoman and a shrill fishwife to serve him. As Kitty, Karina Strange is a purring, pant-rubbing sex kitten. Chitwood’s a grim divorcée who can’t figure out if he’s hit the jackpot or being had. It’s a fine and weird piece with solid acting, but as an opening act, the surreal “Kitty” sets the tone for a different show than what follows.

Next comes “Funeral Parlor,” the definite standout, with tight performances, solid comedic timing and a healthy dollop of genuine pathos. At her husband’s funeral, newly widowed Susan (Susan Shumate) politely attempts to deflect the overeager concerns of mourner Marcus (Tony Dingman). She speaks in mannered code, but Marcus the commuter train pariah doesn’t understand social cues at all. It’s hard not to cringe as the skit chainsaws through middle-class conventions and America’s ambivalent attitudes toward grief, but that’s the point. The cathartic denouement is both poignant and hilarious, and Shumate and Dingman sell it like their very lives are at stake.

Building on the theme of forsaken social conventions, “Wanda’s Visit” brings Chitwood and Strange back as a weary husband welcoming his high-school flame Wanda to dinner at home. His wife (Shumate) isn’t so thrilled, but her reluctance turns to hysteria as Wanda blows in like a tic-ridden hurricane, belching her disastrous personal life all over their living room. Strange shines in this role, creating not so much a person as a living train wreck — vivid, grotesque and compelling.

The next half doesn’t fare as well. Cara Hicks’ monologue in “Woman Stand Up, New York 1985” is enjoyable and suitably uncomfortable, but it feels tacked on and does little to set up the second act. “DMV Tyrant” is nearly intolerable. Chris Anger, who plays minor supporting roles in the first act, is out of his depth in this pas de deux between a desperate man and an obstinate civil servant. His lack of timing and inflection gives Hallie Kirk little to work with, and what should have been a sharp-edged farce is a flaccid drag, draining the energy of the entire show. The evening closes with “For Whom the Southern Belle Tolls,” Durang’s classic parody of Tennessee Williams’ “The Glass Menagerie.” It’s also undermined by a lackluster, one-note performance by Anger, and what could have been an explosive ending fizzles into a frustrated whimper.