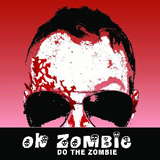 OK Zombie opens Do the Zombie with “Like You,” a song that kicks off amid a wonderfully infectious riff that rings of vintage, lo-fi garage rock. But just as suddenly as you get settled in, waiting for the heavy swell — the song and the album into an unfocused mishmash.  From this point on, the album fails to recapture the excitement that the opening notes promised and leaves the listener with a muddled concoction of electronic dance-pop, British mope-rock and the aforementioned garage sound. It’s as if no one in the band wanted to make a decision on creative direction — so they just went with them all. The two singles “Departed” and “Alone” don’t seem to stand enough above the rest of the tracks here to be presented as singles. Both songs sound like a mash-up of the weakest tracks in the collective catalogues of U2, Morrissey and The Cure. There’s a lot that points to creativity and chemistry among the band members, they just seem to have overshot the target on this one. OK Zombie plays the “Zombie Prom” at 8 p.m. on Oct. 10 at ear X-tacy (1534 Bardstown Road).