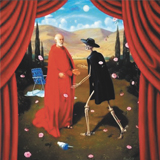 Vic Chesnutt and Elf Power? What is this? Some experiment putting “old” in a room with “new”?

The truth is that Chesnutt is no stranger to collaborations. He’s recorded whole albums with Widespread Panic and Lambchop, so this record is another example of Athens artists working together.

Naturally, Chesnutt, the central singer and, judging from the literary bend of the lyrics, the central wordsmith, brings a certain acerbic quality to the otherwise ordinary folk-rock songs. He once told the New York Daily News, “Other people write about the bling and the booty. I write about the pus and the gnats. To me, that’s beautiful.”

Around Chesnutt’s underdog characters (i.e. “Little Fucker,” “Bilocating Dog”), the Elves bring the interesting and oft intricate instrumental arrangements one comes to expect from the Elephant 6 collective, from which they spring. More than anything, this is an album of stories, commentaries and searing social observations (“We Are Mean”) wherein the Elves’ bright harmonies, backing vocals and choral parts highlight or counter Chesnutt’s profundity of marginal characters, dark dimensions and ill intentions. Truly, he’s served well by the Elves, who know exactly how and where to accent Chesnutt’s warbly voice and exactly with what. —Shawn Telford