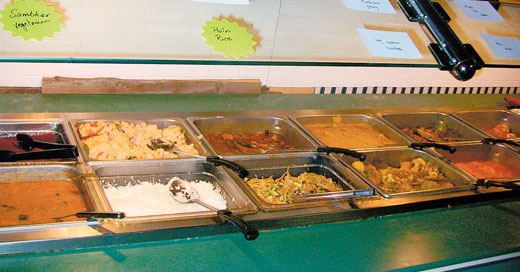 Step into DakShin’s spacious, almost cavernous quarters, blink until your eyes adjust to the dim, and you might think you’ve found your way into an oddly named barbecue joint. Square, rough-hewn log walls frame heavy booths of oak; atop a wall at the back, looming above a large-screen television, rests the biggest canoe you have ever seen.

But take another look, and then a sniff. Elusive, aromatic scents of curry direct your palate away from barbecue. Check the television and you’ll find Bollywood-style MTV, piped in straight from India. The art on the walls is Indian, and so are the massive, colorful, Tiffany-look light fixtures that dangle from the high ceiling.

DakShin is Southern for sure: The name means “The South,” assuming that you are speaking in the dialect of Tamil Nadu, the southernmost state of India, whose major city, Chennai — formerly named Madras and perhaps best known for its colorful fabrics — is India’s Motor City, a center of world-class canoe racing and home to a distinctive Indian regional cuisine.

This recent arrival ranks as one of Louisville’s most unusual Indian restaurants. Tucked away in a storefront in Eastland Shopping Center, where Buechel meets Fern Creek on Bardstown Road, it has become a favorite among the region’s Indian community. Now hungry Westerners are discovering it, too.

The chefs come from Chennai, according to a friendly server and the outgoing maitre d’, but the original plan to feature only the cuisines of Southern India soon gave way to a more ambitious goal: The menu is said to include at least one dish from every Indian state, from Tamil Nadu and the Malabar Coast to Kashmir and the Himalayas.

This makes for a massive bill of fare, with more than 200 items listed, virtually all at remarkably affordable prices. Just about everything is under $10, with combo plates up to $14.99. (The menu lists the dishes only by name, without descriptions or information about their regional origin, but we’ve found the servers uniformly eager to explain the dishes and discuss the food — in excellent English. A more detailed menu is said to be in the works.)

Out front, a colorful wagon called “Chaat Corner” — open evenings only, after 5 p.m. — vends chaat, Indian small plates somewhat akin to tapas or dim sum. They’re all $5 and under and made for walk-around eating. On a night when Las Gorditas, the Latino trailer, pulls up at the other end of the strip, Eastland Center becomes, by any measure, the most exotic place to get ethnic street food in Louisville.

We’ve become more smitten with each of several visits. The daily lunch buffet may be one of the city’s best bargains. An all-you-can-eat array of Indian dishes goes for $6.99 plus tax on weekdays; $7.99 on Friday, Saturday and Sunday. In addition to the buffet, servers keep you supplied with steady surprises, from potato-stuffed masala dosa lentil pancakes to a fetching, tangy, buttermilk-yogurt drink.

We returned in the evening for a full dinner and placed our fate in the hands of a friendly server, who set us up with a South Indian appetizer of masala fried fish ($4.99; bites of crispy, sizzling fried white fish coated in a fiery red spice rub, with lots of raw onion); and dry chili chicken ($5.99), an “Indo-Chinese” (Chinese made in India for Indians) appetizer of tender chicken stir-fried with onions and a boatload of jalapeños … hot, hot, hot! Then for main courses, Hyderabadi goat ($10.99) consisted of tender, not overly strong goat meat on the bone in a warming, dark-brown sauce; and guthi vankaya ($7.99), a wonderful vegetarian dish of baby eggplants simmered in a mild, thick, aromatic pale-tan sauce. With crunchy pappadams and a couple of tender naan flatbreads from the tandoori oven, plus a big Kingfisher beer to share, we were good to go.

We got out of brunch for two for $17.19 plus tip; a filling dinner and a deserved tip well over 20 percent managed to stay under $60. DakShin is a keeper.

INSIDER INFO FOR THOSE WHO DINE OUT

Since switching careers five years ago from banking to cooking (which has begun to look like the luckiest accidental bullet-dodging ever), I’ve learned a new language: KitchenSpeak.

Recently I wrote about how controlled but chaotic a busy, successful commercial kitchen is. KitchenSpeak helps simplify our duties and interactions. It’s a weird, hopefully efficient, sometimes crude amalgam of verbal shorthand, hallelujah choruses, superstitions and private jokes. Every restaurant has its own particular patois and dialect — while sharing other KitchenSpeak terms and definitions with other restaurants everywhere.

Example: Brevity is the soul of getting food to tables fast, so words lose a syllable or two. “Regular” becomes reggae. “Linguini with meatballs” becomes ling-ball. “Mushrooms” condenses to mush. Thus, the plain English sentence, “On the left is the regular linguini-with-meatballs pasta dish and on the right is the linguini-with-meatballs pasta dish with mushrooms added by special request” is shortened in KitchenSpeak to “Left, reggae ling-ball, right, speck ling-ball add mush.” That’s a 36 percent savings.

In a loud, boisterous atmosphere, it’s also important to acknowledge the exchange of information. Otherwise, the person giving direction might never know if the person receiving even heard it. So, if the sous chef pulls a ticket and calls out “Walkin’ in (i.e., “this is a new order”) pantry: two small Caesars with chicken. One D.O.S.!” the first thing the pantry station worker does is holler “Heard, Chef!” or “Check, baby! — Two chicken Caesars, one doss it don’t toss it!” Translation: I hear you and obey. Two Caesar salads, add chicken to both; one with dressing on the side. (D.O.S. = Dressing On the Side.)

Guests’ steak-doneness preferences are crucial. It’s easy to differentiate the expo’s (expediter) calling for a “rare,” “medium” or “well-done” steak. But suppose he yells “medium-well” and the “-well” part gets lost in the crash of a busser dropping his tub? So “medium-rare” becomes mid-rare, and “medium-well” becomes mid-well. Consequently, if you hear “mid,” you know you need to expect another modifying syllable.

Some superstitions and customs are particular to each kitchen alone. Where I work, we have only one door between the kitchen and dining room. That demands a strict rule about which way the door swings: It swings out into the dining room for those laden with full plates of hot food bound for tables. It swings out again, toward the kitchen, when one’s inbound and laden with dirty dishes. This critical rule helps avoid repeated collisions. Even so, if you’re so heavily laden that it’s unavoidable — and you’ve peeped through the door’s glass porthole to ensure no one’s within a few inches of the other side — it’s acceptable to push the door open from the dining room into the kitchen … if and only if you holler “Wrong way!” as a warning when you come through. This has become so ingrained that I even yell “Wrong way!” if it’s 5 a.m. and I’ve just unlocked the door and I know I’m the only person in the building.

Some things are simply inexplicable. So if you’re in our dining room and you hear a loud, unanimous “Yeeeeee-HAW!” from behind the kitchen door, you’ll know somebody’s ordered a “Wild Bill’s Cajun Cheese” appetizer platter.