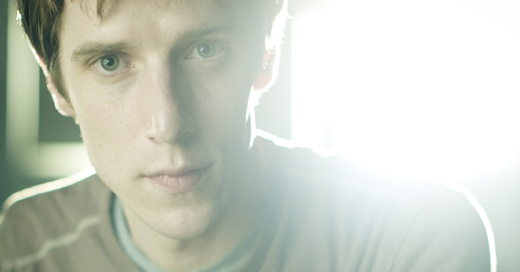 On the Kentucky side of Cincinnati, heading southwest, is a little town called Cold Springs. Blink and you’ll miss it. But slow down and listen to the wind, and you just might hear the quiet strumming and soft voice of Daniel Martin Moore, a 20-something troubadour with a soul much, much older. To some, the warm, round sound of his voice, along with its inherent and seemingly ancient wisdom, will sound familiar.

“Nick Drake is an artist I admire,” Moore admitted. “I like all of his records, but Pink Moon is the one that holds the most magic for me.”

“These aren’t traditional ballads or even Carter Family songs,” he said. “But they are mostly acoustic and quiet. I think that must be what people mean nowadays when they use the term ‘folk.’ They must just mean that it’s not real loud.”

Regardless, the 11 songs of his Sub Pop debut Stray Age conjure bucolic images, vast, open landscapes and carefree feelings, the sonic equivalent of the countryside, rolling and green. As Moore explained, these responses may not be accidental. “We live on, in and amongst the land. It shapes our lives, how we move, all the things we do.” As if on cue, thunder rolled through the sky shaking the floor of his house, reminding him that nature has indeed inspired his work.

Yet it’s not escapism he wishes on his listeners: “I’d hope that these songs would be a respite of some kind, that they might offer a quiet and meaningful pause.” In those moments, however, it’s not about forgetting where you are but understanding who you are.

To understand himself, Moore spent a chunk of his life on the road. Not like Kerouac, thumbing across America drinking and drugging, but more along the lines of Alexander Supertramp of “Into the Wild” fame. In 2006, he joined the Peace Corps, which took him to Cameroon. Later, he got a job in Costa Rica working at a B&B.

“When you spend time in cultures other than your own, you get glimpses of all sorts of things you hadn’t considered before. Maybe you start to see old things from fresh perspectives. Maybe you see your perspectives from other perspectives. Really getting into another culture makes you acutely aware of your own tastes and biases, most of which felt absolute beforehand. Your ideas unravel a little bit, letting other ones sneak in.”

The experience also moved an admiration for the guitar into a full-blown affair. “I hadn’t participated in music since I was a young kid singing in church choir, and it felt like a good time to get back into it.”

The resulting four-song demo snuck past Sub Pop’s “No Solicitation” sign and landed him a record deal. Yet, as far as making a career of it, “I’ll give this as good a go as I can and see what happens. Music always has been and will continue to be an important part of my life, whether it turns out to be able to support me or not.”

In the meantime, Moore said it best in his own song: Darling, come be close and be rested.