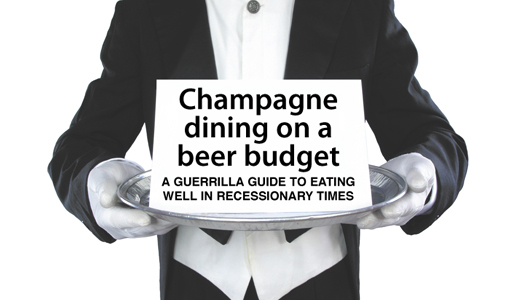 The other night, I wanted to treat my sweetie to a dinner on the cheap, so we strolled up to the corner and put on the feedbag at Porcini.

Porcini — the Crescent Hill hangout where local celebs like Rick Pitino gather to see and be seen while they chow down on calamari and marinara — is a comfortable place with a sterling reputation for welcoming service and, of course, Chef John Plymale’s cookery.

But few would call it “cheap,” with an expansive Northern Italian menu that can range up to $30 or more for some of the entrees. (“Filetto Alla Giovanni,” which I take to mean “John’s-style tenderloin,” is a cool $30.95, no extra charge for the sauce of Portobello mushrooms and fine Madeira wine; “Vitello alla Griglia,” a grilled veal chop that weighs in at darn near a full pound, is $32.95.)

In short, a couple can build a meal here with appetizers, salads, main courses, desserts, a nice bottle of Italian wine, tax and an appropriate tip, and walk out paying maybe $150 for two. That’s not “cheap,” Bubba, at least not in my book, and probably not in the book of an ex-hedge-fund manager who’s looking for a new job this month.

Nevertheless, it’s possible to dine well on the cheap and, if you’re a foodie like me, continue to enjoy many of Louisville’s top-tier eateries without having to take out a second mortgage or even liberate a few bucks from that deflated 401(k).

In LEO Weekly’s guerrilla guide to eating well in recessionary times, let’s go over a half-dozen simple strategies to open the doors of many of the city’s fanciest eateries to those of us who would really rather not crack the three-figure mark for dinner for two … or, ideally, not even get close to it.

Skip the main course. This is how we rolled at Porcini: The restaurant’s excellent Caesar salad and its even better iceberg wedge with gorgonzola dressing made a splendid start. A hearty bruschetta topped with Sheltowee Farm mushrooms and an oversize bowl of the best fried calamari in town, as crisp and light as tempura, with a light, fresh marinara for dipping, made a filling main course, and none of the diners around us realized that we were making our meal out of appetizers with no entrees. With a couple glasses of a very good Chianti, we held our bill under $50, and believe it or not, there was enough food that we took some of the mushrooms home. This approach is in no way sleazy or inappropriate, by the way: We informed our server of our plan beforehand, and she was fine with it. (And, although this isn’t mandatory, I elected to overtip to make up for our low-spending trick.)

Share plates. I wrote about using this approach in a dinner at Primo earlier this year: Two diners, one plate, divide the entrée price in half. Tough times lead to tough measures, and few fine restaurants will object if a couple requests to share a main dish or dessert. Some will go out of their way to plate the dishes separately, an elegant service that we’ve enjoyed recently with a Cobb salad at Café Lou Lou and with the shrimp and grits at the Westport General Store. Separate plating is not really necessary if you and your sweet are OK with attacking the same plate with separate forks, though. A few establishments will invoke a nominal “sharing charge” in an apparent effort to deter cheapskates, but in this economy, I think just about every eatery would rather have two people sharing one dish than no people in the house.

Don’t go in hungry. We’re getting a bit abstemious here, but the advice that works to hold down impulse buying at the grocery store works for restaurants, too. Enjoy a light salad or a cup of soup before leaving home, then head for your fancy restaurant hungry but not ravenous. Taking just enough of an edge off your appetite to silence the siren call of appetizers or a second decadent dessert may help you keep the tab under control.

Drink smart. As a certified wine geek, I can’t believe I’m saying this, but you can save a lot of money at a fancy place if you’re willing to substitute a quality NA beverage for the wine list. If the restaurant features well-reputed hot teas, you’ll find much of the same intriguing complexity, fragrant and floral aromas and food-friendly flavor in tea as you get in wine. OK, there’s no alcohol. If that’s a problem, check the beer list. Although a few of the city’s top spots limit their brews to horrifying industrial swill, more are adding at least a few quality artisan microbrews, and this makes a fair alternative. Wine by the glass is rarely an economical option, but remember that the state’s recent “doggy bag” law allows you to take that leftover half-bottle home for another day. And of course, many restaurants offer half-price wine nights on specific nights of the week. Call your favorites for details, and enjoy!

Now that we’ve given you all these money-saving ideas, let’s finish up with a couple of Thou Shalt Nots.

The first is so simple that we shouldn’t even have to tell you: Thou Shalt Not run out on your bill without paying. Not only will this criminal act earn you really bad karma, it might get you arrested and facing charges. Don’t even think about it.

The second warning can bring equally bad juju, but probably not the constabulary. Still, the rule is firm and unbreakable: Thou Shalt Not Stiff the Server. No matter how broke you are, if you’re dining in a fancy place — even on the cheap — you need to take care of the poor attendant who had to hustle out your hot dinner and do all the other jobs a server has to do. In this day and age, 15 percent is no longer sufficient; tipping at least 20 percent is the right thing to do, and if that’s difficult for you, just remember that your server is struggling through the same recession you are.