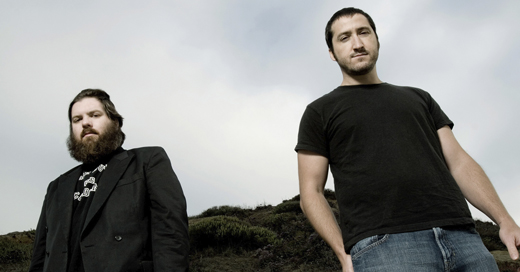 Rob Crow is walking through Athens, Ga., with a box of robots. His band, Pinback, a collaboration between Crow and Armistead Burwell Smith IV (Zach), have already endured a grueling start to their fall tour, which stops Friday at Headliners with sBACH. With a box of robots in his hands, Crow talks touring, “Rock Band” and missing you in a Slint way.

Rob Crow: It’s going pretty good. The shows have been weird, but I think they’ve all been good.

RC: Well, about a week and a half before we were supposed to leave, one of our keyboard guys, Terrin (Durfey), his cancer came back really bad, so he had to bow out at the last minute. And we’ve been training up another friend of ours, Braden (Diotte), so we gave him about a week and a half to learn 30 songs. So, it’s been weird, like we miss Terrin, but we love Braden. And yesterday our sound guy popped his Achilles tendon. He just got out of surgery. Hopefully he’ll be meeting us at some point.

LEO: Are you releasing a tour-only EP?

RC: Yeah. We’re basically finishing them as we get to a club.

RC: We started doing this thing, and we did a little video called “The Rob and Zach Show,” where we’ll play a bit of weird beat-box, Casio or betawave versions of our regular songs, and it’ll just be the two of us. And I’ll play an acoustic guitar, and so it’s four of those songs and an unreleased song that I tried to put on the album (Autumn of the Seraphs), but I couldn’t really get a handle on it, production-wise. Hey, I figured out how to do it now. So we put two versions of that song on there.

LEO: Is that something that makes a good rock show?

RC: It’s where we get sound just right. It’s great if people are really into it. But if, for some reason, we’re thrown into a situation where people aren’t expecting to watch us and they wouldn’t want to watch us, and we have a great time anyhow, that’s also a great show. Not necessarily for them.

LEO: The cover art for Autumn of the Seraphs is more like a comic than your other albums. And then there’s “From Nothing to Nowhere” where you say “ray vision” over and over. Are there ways that comics trickle into the music?

RC: Sort of, but the ray vision thing is a way of tiptoeing around the fact that the song is about historical revisionism.

LEO: Why tiptoe around it?

RC: Because if I didn’t tiptoe around most of the subjects I (discuss) in these songs, we’d just sound like The Dead Kennedys.

LEO: There’s one of your lyrics that I’ve been fixated on since I heard it. The lyric is from “AFK,” and it goes: I miss you but not in a Slint way.

RC: It’s just the way I felt in the song at the part and the images that I was trying to present at the time. The character in the song was missing a person, but I didn’t want it to sound like the end of (Slint’s) “Good Morning Captain.” I’m not screaming about it or nothing. But I do miss you. I’m not getting out of hand over here. But I do miss you.

LEO: What else do you take on tour with you?

RC: I think it’s only going to do good things for people. I think for people who play it, who go on to do real music, it really helps with their meter, which is something that’s important to me.

It’ll make people tighter. Whereas people who should not be in bands, which are the kind of people that would actually, you know, “YAH! I do everything in ‘Rock Band’ on expert. Buy me a drink.” Those are the same people who are in bands who should not be in bands. The same people who put their band’s sticker on every stop sign by the highway. We can take care of all those people in one fell swoop by buying them each a (copy of) “Rock Band.” And never have to worry about their shitty bands.

Pinback will be taking donations for Terrin and his family at the show, as well as this MySpace page: myspace.com/terrindurfeyfoundation.