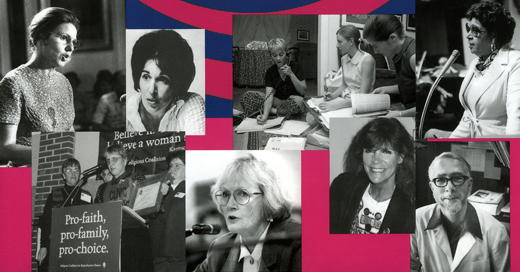 Standing Up For Reproductive Rights: The Struggle for Legal Abortion in Kentucky

If you were fortunate enough (or brave enough) to see Mike Leigh’s film “Vera Drake,” then you have a graphic sense of what life was like before legalized abortion — not only for desperate women seeking to terminate unwanted pregnancies but also for those medical practitioners who took great risks in order to carry out a mission they believed to be necessary and, yes, morally right.

In Leigh’s film, Imelda Staunton plays a working-class woman who, by day, toils as a house-cleaner but, after hours, unbeknownst to her own family, performs abortions — not for profit but free of charge, simply because she believes in the absolute necessity of what was at the time one of the only reliable (albeit dangerous) forms of birth control.

In Louisville in 1956, Vera Drake’s counterpart was Cecile Richardson, a former medical technician who provided abortions in her home for more than a decade, despite repeated arrests and imprisonment. At the time of her first trial, in 1956, Richardson was described by The Courier-Journal as “the attractive mother of two children.”

Richardson’s is the first of many vivid stories brought to life by Fran Ellers (herself a veteran C-J reporter) in her impressive new volume about the struggle for abortion rights in Kentucky, “Standing Up for Reproductive Freedom.”

Ellers’ initial plan was to gather the personal narratives of Kentucky women who, over the years, had undergone abortions, reasoning that “if we spoke publicly, it would help both allies and opponents understand more about the real people who have chosen abortion.” However, when she applied for a grant from the Kentucky Foundation for Women for that project, Ellers was turned down. According to an interview with her, it was fortunate that shortly thereafter the ACLU applied for a grant from KFW — to write the inspiring history of four decades of activism in Kentucky — and this time received “a very generous $6,000.” Ellers was the first person Beth Wilson (former executive director of ACLU of Kentucky) turned to.

It proved an excellent match. At her core, Fran Ellers is a journalist who knows how to dig up dirt and bring it to light. There are stories here of fearless medical practitioners, grassroots organizers, religious fundamentalists (and the progressive religious coalition that fought them), the expansion and decline of Planned Parenthood and, of course, the tireless work of the ACLU to keep reproductive freedom alive and well in our state. Kentucky, it turns out, is one of only five ACLU affiliates in the country with full-time staff dedicated to reproductive freedom. The ACLU here has been steadfastly advocating for abortion rights since 1970.

For a brief, bright, shining period, doors continued to open in Kentucky. When you consider that as late as 1971, committed organizers had to work behind the scenes with dedicated doctors to arrange secret car trips to New York for women seeking abortions, it seems astonishing that by the end of the following two decades, there were nine legal abortion providers in Kentucky. Even more astonishing is that as of this year, there are only two.

This decline follows a national trend. In 1992, there were 2,380 abortion providers in the United States. By 2005, there were only 1,787. According to Ellers, factors contributing to the overall decline include “anti-abortion harassment and violence; social stigma and marginalization; professional isolation; the aging and retirement of providers; inadequate financial and other incentives; and lack of medical training opportunities.”

But the ACLU is not giving up. Perhaps the most genuinely captivating thing about witnessing the battle is the layout of Ellers’ book. For starters, it’s brimming with fascinating then-and-now photos of well-known locals (among them: Suzy Post, Lucy Freibert, Georgia Powers, Nancy Gall-Clayton, Johanna Camenisch and Jessica Loving). The pages, easy to look at, contain numerous sidebars, fact boxes and reproductions of pertinent, significant documents.

It is a book that, despite its sometimes-dark subject matter, invites you into its pages. Let’s hope that it serves as the springboard into the next book, the one Ellers initially wanted to write. We still need to hear those women’s stories.

The ACLU will sponsor a free reading and panel discussion by Ellers and others at Carmichael’s on Frankfort Avenue on Saturday, Oct. 18, at 4 p.m. Fran Ellers will also be at the Kentucky Book Fair in November with copies of her book.