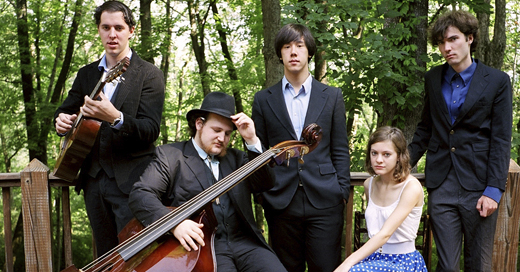 Rise of the Republic

Louisville native Chris Miller and his band, The Young Republic, have opened for The Mountain Goats and Bon Iver in England, but the group hasn’t had as much luck stateside. They’re hoping to change that when they play an all-ages show Friday at The Brick House (1101 S. Second St., 213-0428).

Young Republic formed while Miller and the other bandmates attended the Berklee College of Music in Boston. Miller was majoring in jazz composition, but once the band started writing, “School fell out of our top priority,” he said.

The band relocated to Nashville and signed with U.K. label End of the Road Records, which just released its newest EP, Idiot Grin, a cauldron of ’60s pop that the band will abandon on its forthcoming album, due out this spring. Hear selections at
www.theyoungrepublic.net.

On any given show, the members of Nebraska’s Midwest Dilemma can number in the 20s, but this time conductor/composer Justin P. Lamoureux will travel a few musicians short of the full deck. They join Eremy•Jirvin at 8 p.m. Monday at 6th & Oak (530 W. Oak St.).

Dilemma’s latest, Timelines & Tragedies, which came out Oct. 7, charted in CMJ’s Top 200. The concept album grew out of songs Lamoureux wrote about his grandfather, who served in World War II under Gen. Patton, and his father, a conductor for Union Pacific. “I love telling their stories,” Lamoureux said. “I realized the music we could make would really do this justice.”

We speak with Chris Owens of Lords, whose new album, Fuck All Y’all Motherfuckers, comes out this week. Listen at leoweekly.com or myspace.com/leoweekly.