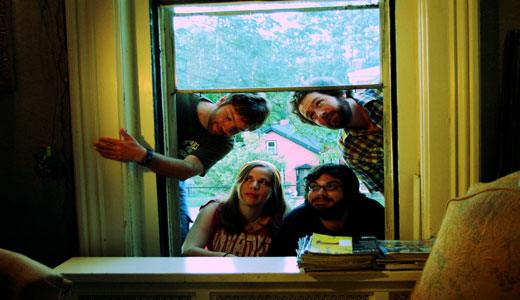 The first thing you notice is the camaraderie, and it’s not the chumminess of casual friends. Carrie Neumeyer, Jeremy Irvin, Evan Bailey and Justin Davis have known one another far too long to keep it on that level.

The dynamic is this way because each personality permits it. Irvin, 31, is the grand schemer. He once dressed up in a raccoon costume and waited in an alley to feed Wendy’s to real raccoons, a scene he wanted immortalized on the band’s 1999 split-disc Stories, with the then-rising local outfit The Helgeson Story. No raccoons showed up to chow down, so Irvin improvised, wearing the costume while riding a unicycle.

“Jeremy has these elaborate schemes,” Neumeyer chides playfully. “But when it works, it’s great.”

“I’ve got big dreams, man,” Irvin shoots back. And the laughs kick in, as they do many times over the course of the night in Irvin’s kitchen, talking trajectories.

Justin Davis, a bassist since age 10, was a fan first, locking in on the group’s 7-inch record, “Weddings, Parties, Sympathy,” and never letting go.

“That was the album that made me fall in love with Second Story Man,” Davis says. “When I was asked to join the band, I immediately jumped at the chance.”

Bailey, a onetime guitarist and self-taught drummer, speaks softly if at all. He’s a deliberative cat who lets his beats do the talking.

Second Story Man is slang for a thief, but while the band never stole to survive, it bartered here and there. Do-it-yourself means doing everything, and that includes asking for favors. Neumeyer convinced one of her teachers to let her screen-print SSM’s T-shirts, one of the band’s 7-inch covers and the 2002 “Louisville Is For Lovers” compilation. Irvin started Landmark by saving up enough money from his job at UPS, working under the sage advice of Noise Pollution Records.

“I was living in a house with four other guys and paying really cheap rent. I was saving up tons of money and working my ass off. I decided, ‘Man, I know I don’t wanna do this forever, and I do wanna have something to contribute, somehow, so I’ll just start a record label,” Irvin says.

Noise Pollution co-released the 7-inch with Landmark. After roping in Kelly Scullin on bass and vocals, the 10-member Helgeson Story Man crammed their gear and themselves into a 15-passenger van, ignoring whatever claustrophobia to make their first batch of out-of-town shows happen.

“We took out two rows of seats and stacked all the equipment up and then laid two beds down,” Irvin says. “They’re like a chair that flips out into a bed, and I remember being at a party one time, and I started getting everybody to ride those down the stairs. But we laid those on top and two people had to lay on those next to the ceiling in, you know, suicide fashion. So if we got in a wreck, (those two) were gonna die.”

Like most independently touring bands, Second Story Man’s road experience was a lesson in tolerance, fortitude and humility. “I think we had a real funny idea of what tour was like at first,” Neumeyer says. She laughs. “We thought people would be there, you know?”

“Sometimes there were,” Irvin says with leveled optimism.

“But I mean, it was just really fun,” Neumeyer continues. “Kelly and I always thought of it as like a slumber party outside with all your friends, where you can play music. I just always loved it. I still do, even though sometimes it can be disheartening if you’re playing somewhere on a Sunday night or Monday night. It’s still fun.”

In 2001, Second Story Man found themselves in a territory with which they had become quite familiar: need record, need money to record. Once again, ingenuity and ideas flowed, and the band found a way. Neumeyer and Scullin applied for a $3,000 grant from Kentucky Center for Women. “We worked so hard on it, to the point where I was freaking out, ‘If we don’t get this money, I don’t know what we’re going to do,’” Neumeyer said.

The result was Pins And Needles, an elaborate pop-rock continuum smothered in harmonies — a trademark you can find on all Second Story Man’s records. On “Untitled Song” Scullin and Neumeyer’s voices wash out over solemn acoustic picking, like you’re going to a church where Brian Wilson’s directing the choir. Beauty steps aside for the beast every now and then: “No Pioneers” and “Luck” buck with well-timed explosions of distortion and furious drum fills, as if the band’s unsatisfied with the picture it’s painted and can’t wait to shred the canvas. Slowly, but not suddenly, comes “Typewriter,” a departure made up like a quasi-Western ready for your next overnight drive across California.

“Talk As Though,” anchored by Bailey’s circus cabaret beat, feels directed at phony conversationalists, while the two-minute dreamscape “What A Find” is focused and freeing, and “Paddle Your Own Escape” — clocking in at 8:34 — smashes the happy and breezy with a doomed keyboard-and-drum outro.

It was enough for Sebadoh. Arguably the biggest bump to Second Story Man’s career came when they opened on a tour with the indie rock progenitors in 2004. The tour was a massive, eye-opening opportunity they won’t soon forget, but the trip turned bittersweet when, upon returning home, Scullin left the band.

Scullin’s departure presented a challenge for the band, and it had an effect on their creative output. After picking up Davis, the group released 2006’s Red Glows Brighter, what Irvin calls a transitional album. “Mitey Might,” the leadoff, seethes with punk tenacity. Neumeyer was now the lone female singer, but you would never know it listening to “Catalyst,” as the dudes sing with equal dexterity. The gypsy swing and close-quarter vocals of “Cancer Dance” offer a renewed determination, even if a touch of depression creeps through Red’s sonic corridors.

To help drum up press for its three-week album tour, Second Story Man hired a publicity firm, Team Clermont. The move was wise, but in a fragmented musical environment, even professional publicists working the phones can’t guarantee a crowd.

Last year, while on tour with Follow The Train, Davis visited Team Clermont’s offices in Athens, Ga. He didn’t need to introduce himself. “They had the CD. They knew who we were,” Davis says. “But there’s only so much you can do. I don’t know how any independent band would manage to do a long three-week tour like that anymore.”

Over time, the band has learned to temper their expectations with a certain level of realism. As they continue tracking their new full-length album this year, they are writing to share, but they’re cautious of being wrapped up completely in audience validation.

“I think there are definitely people who can distance themselves from that,” says Davis. “They can play to five people, and it doesn’t faze them one bit. They really don’t care, but I think it’s definitely hard not to notice that there are only five people in the audience when you really think … when you love your music so much and you think there should be more.”

“I do hope it leaves an imprint on someone somewhere,” Irvin says. “The thing I always pulled away from tour was even if there are only — if we had a small crowd, it seemed like there was always that one person who would come up to you right after you finished playing and say something really genuine and nice. And it felt so good. When you have someone you don’t know at all come up to you at a show and say that was really awesome … ”

“We wouldn’t be doing this if we didn’t love it,” says Neumeyer. “We care for it much more than to call it a hobby.”