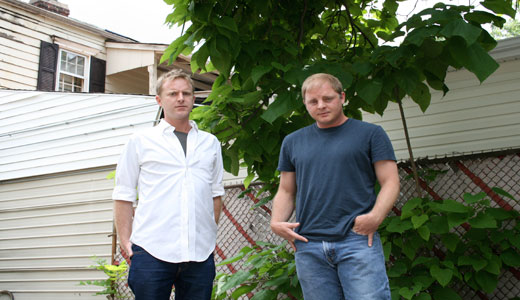 Don’t call it a throwback.

It’s a new idea that’s a few more building blocks atop a solid foundation that has been present in the music world since the ’60s. In an era full of experimental music, the Louisville indie folk-rock band The Mack maintains those solid, simple grooves that can still make a body sway, intertwining the creative with the classic in a coherent way.

“We want to create a sound, at least live, where people can be entertained and want to dance,” said lead singer/guitarist/harpist Jeff Shelton, who plays alongside drummer Pete Townsend.

The band started out as Ronnie Mack and the I’ll Beat Your Back Out Band, then shortened to Ronnie Mack, and now finally just The Mack. Ronnie Mack is Shelton’s father’s first and middle name, and no, he wasn’t a musician. Ironically, Ronnie Mack wasn’t particularly supportive of his son’s musical career.

“He’s not too thrilled that I do it,” Shelton said. “In fact, we don’t even really talk about it.”

Shelton simply wanted his band to have a name that meant something to him personally, and he said it was actually his grandfather who shared his love of music. Even today, when Shelton and his brother visit their granddad, they get out his collection of old instruments and jam together.

Shelton’s appreciation of the roots of rock ’n’ roll, particularly from the British Invasion, is evident in his music. Though the trimmings of The Mack’s sound have changed with various band members coming and going over the past few years, the groundwork has remained: solid, simple backbeats, with a strong drive that gracefully accelerates each track while simultaneously taking you back to the era Shelton values so much.

The Mack on MySpace.