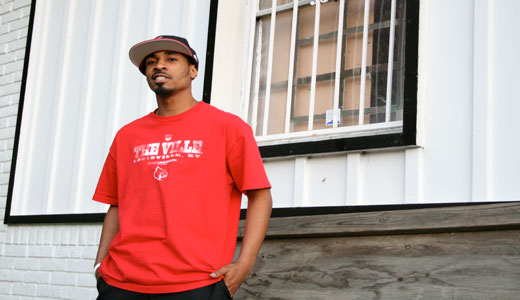 You could say that T. McAfee, a 24-year-old emcee from the West End, has taken the proverbial “road less traveled” on his path to hip-hop success: the debate team.

Let’s back up: He’s been rapping seriously for about eight years, after having transitioned from singing R&B, which he says limited his range. He’s working on his first mixtape, Courtesy of Self, and hopes to have it out later this summer on his own R.E.B.E.L. Status Entertainment. Production duties are handled by various up-and-comers, including Ren-a-sance, Bill Heinz and JuJu Pap Pap of Skyscraper Stereo.

T. Mac’s major influences include a who’s-who of early ’90s classic rappers: the omnipresent Notorious B.I.G. and 2pac, E-40, Tela, Too $hort, Eightball and the like. He credits his sister for the education by “recording damn-near every episode of (BET’s) ‘Rap City.’”

His own sound is of the same era, but from a little further North: a bridging of the Chicago swagger of Common and Lupe Fiasco with the cool of A Tribe Called Quest and laid-back bounce of Ludacris’ better work.

The hip-hop community as a whole is growing and moving, he says, but “as far as the right direction, that could be argued.”

It may not be a tightly-knit crowd, but everyone knows each other. “If I don’t know ’em from high school, I know them from college or around (town).” Louisville is full of untapped talent waiting for the right exposure, he says, and artists have to learn from scratch here because it’s not New York City, Atlanta or Nashville.

As for the city itself, he thinks the “vibe is so cool in Louisville … (It’s) a nice place to raise kids in,” though he doesn’t understand the bad rap his neighborhood gets. “The West End on a sunny day is beautiful,” he says, “Just know where you at.” Critical musical love is crucial in the Highlands, he says, and is the key to getting noticed in the city at large.

So, about that debate team. Not exactly one of the five elements of hip-hop, no? Turns out, someone on the University of Louisville’s squad heard a particularly political song of T. Mac’s and passed it along to the team sponsor, who sought him out on his own terms. For nearly two years, McAfee recited lyrics a cappella for his team, winning several team and individual awards. He’ll graduate in the spring with degrees in Pan-African Studies and Philosophy.

Until Courtesy of Self drops, you can check out T. Mac on his MySpace page. His overall message for artists is positive: “Don’t get discouraged. Keep it moving.” If one label passes or one opportunity misses, “work them options. There’s plenty of ’em out there.”

T. Mac’s heeding his own advice.